We might be in for a good rally with impending short-term resolution of eurozone PIGS debt and US debt ceiling issues .. and good earnings news ( eg KepCorp ) .. STi to rise to 3180 then maybe 3230 then we'll see .. 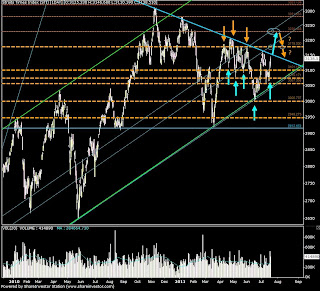 Posted by Bill E at 22:44 No comments: Links to this post

Euro-area leaders may accept a temporary Greek default and ease the terms on bailouts to cash-strapped nations as they intensify efforts to resolve the 21-month sovereign debt crisis, officials said.
With Greece being charged about 35 percent to borrow for two years, heads of government meeting in Brussels may cut theinterest rates on loans to it, Portugal and Ireland to about 3.5 percent and double the repayment period to at least 15 years.Europe’s main rescue fund may get the power to buy bonds from investors, help countries recapitalize banks and offer precautionary lines of credit to repel speculative attacks.
Policy makers are meeting for the second time in a month in a bid to calm Greece’s financial distress and inoculate Spain and Italy from it. Their previous crisis-fighting measures failed to placate investors and the sight of markets in turmoil this week drew calls for tougher action from the U.S. andInternational Monetary Fund.
Seeking to ensure bondholders contribute more to bailouts even if that risks a temporary default being declared, the policy makers considered a 90 percent swap of Greek bonds outstanding between now and 2020, said two officials familiar with the negotiations. The talks are focused on a default lasting just a few days, one said.
To contact the reporters on this story: Simon Kennedy in Brussels at skennedy4@bloomberg.net
To contact the editors responsible for this story: Craig Stirling at cstirling1@bloomberg.net
Posted by Bill E at 19:45 No comments: Links to this post