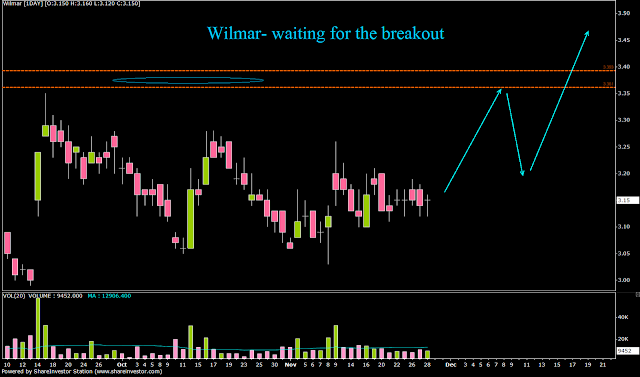 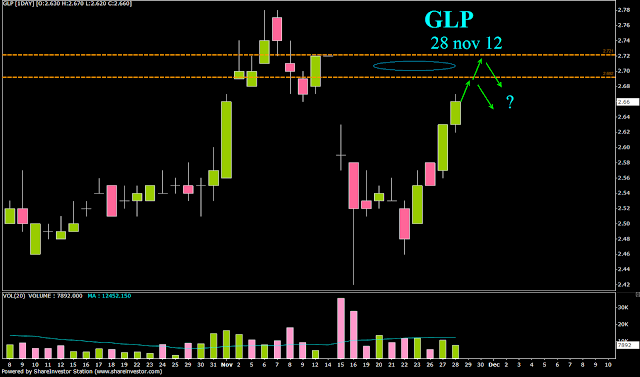 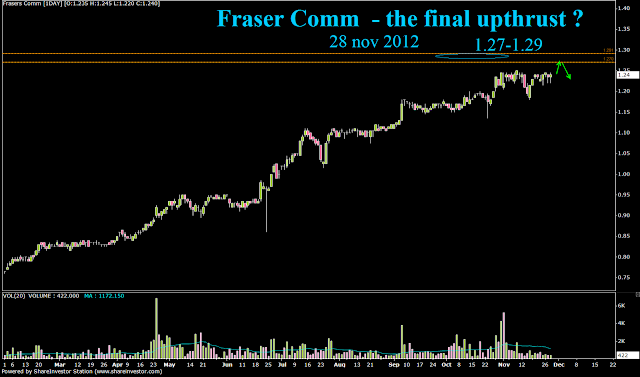 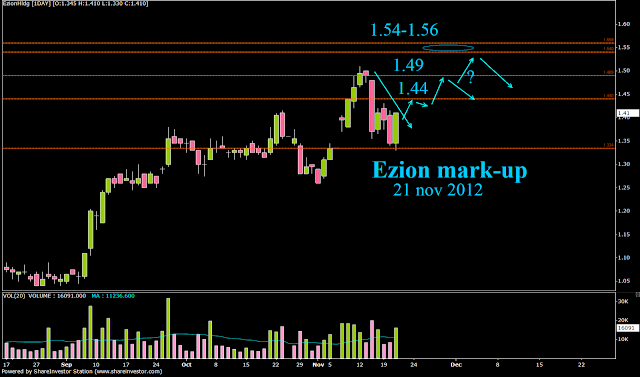 Posted by Bill E at 21:45 No comments: Links to this post

Recently, against the general market malaise over the looming fiscal cliff , one superstock Ezion exhibited  super relative strength with a slew of super good announcements - good profits up 24% yoy to usd16.1m , promising  JV with Kim Seng Holdings winning unexpected mega contracts of usd 298m , 10m new shares placed out to existing shareholders ( former Labroy boss) and also Franklin resources,  templeton investment    suggesting insiders' strong confidence in the company's rosy future .. which suggests mega contracts after mega contracts to no end over the horizon , thanks to the special expertise of Ezion..

Analysts from various broking houses( see chart below)  all upgraded Ezion price targets to minimum of $1.70 all the way to $2.20 , far above the current price of  $1.495( Monday's close)

I am too lazy to plot  a single one of them , but i guess all the technical indicators would be indicating a strong buy ..RSI, ADX, MACD, stochastics ,  moving average cross overs, moving average slope increase , single mom & double pop indicators of all varieties , watever.

Thus we have the perfect esctasy moment for this stock, fundamentally  and technically.

At this time & price , I guess the public sentiment is so maximally bullish over Ezion that one could not pry the shares from the tight grip of public hands  even when they are taking a 100m banjee jump over the fiscal cliff with crocs hungrily waiting at the river  below to snap off any heads within transient reach ( click here for banjee croc youtube video ) ..

Of  course, I could be totally wrong in the face of all these rosy target price upgrades way above the recent pre-Deepavali Monday's closing price of $1.495 ( ie  $1.70- $2.20) from broking houses whom I assumed had special briefings by Ezion management over her super rosy future  ...so who am I  the total outsider to suggest otherwise or rain on their parade  ?

So disclaimer applies ..Course preview coming this friday 16 Nov 2012 , 1930 hrs at Traders Round Table - lots of trading secrets to be shared at preview , for training click here  (  click here to see last post for more details of place and time    ) 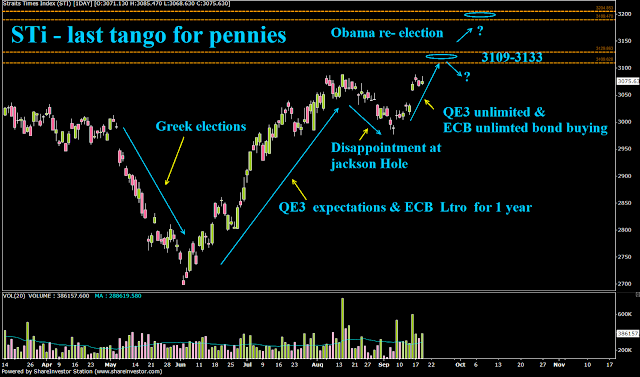 Did you make money wagering on Obama's victory ? : introducing my first trading course in the face of looming fiscal cliff( with later updates on sti & aussino ) .

Owing to numerous requests from some readers for the past one year and  on invitation by the Traders Round Table ( a traders' community set up specially for novice traders to meet experienced professional traders  ) , I will be taking time off my trading to conduct my first & only trading course -  "Introduction to Swing Trading : anticipating , catching & riding market waves with the big boys who manipulate the markets " .

The course is slated to be held on   24/25 Nov  2012 ..  The price is $1688, far below the "market norm" but the value is priceless coming from a veteran full-time trader   --  click here to see collection of recent prescient calls  which are forward predictions , all published well before the event, separately in my various recent posts.

Those who sign up at coming preview will get a special discount and get to learn many trading secrets not found in textbooks or courses that will save you a world of grief costing much much more than the course fees and hasten your learning curve of the markets by decades if not  a life time.

Back to the local market:

I know it is a little late to say this, but the STi  has broken down since 9 oct   but kept partially afloat by the  impending US elections &  some stocks like capland & GLP but  market leaders like kepcorp & dbs have been plunging for past 2-3 weeks.

In my last post 2 days ahead of the elections ( see Election week: betting on Obama - click here)  , i mentioned we should get a very short and very small rally into the euphoria of Obama's victory before we see a big reversal  in the Dow..

Again, it is a bit late to be more specific , turns out last nite was that big reversal nite ... when market realised that elections has not improved chances of resolving  the looming fiscal cliff problem as all the incumbents has been re-elected into congress house of reps which is still dominated by tea party  .

.. anyway that aside  I also said  selected china stocks ( specific stock names buried in comments section of last post  ) may rally which some did in previous 2 days.. like yzj, capland  all rising about 3-5% from tues close to wed high etc

Anyway , stocks aside, if u had wager with me on Obama's election victory , u would have made 30% profits from the bookie.

the markets never reward a trader for chasing hindsight, quite unlike in other realms of human endeavour ..

anyway with the looming fiscal cliff, the STi may follow an inexorable  downward trajectory  if pessimism reigns in washington over next 30 days , with no ray of hope for resolution in sight ...since this is open class warfare between Obama and the tea party  - whose end result is not something  I would want to speculate on and so I am totally out of the market...I wun be shorting either as I do not know when Washington is going to make an announcement of some bipartisan deal of some kind  to "kick the can down the road " so take this chart with many pinches of salt since any good announcement anytime will create a big rally... 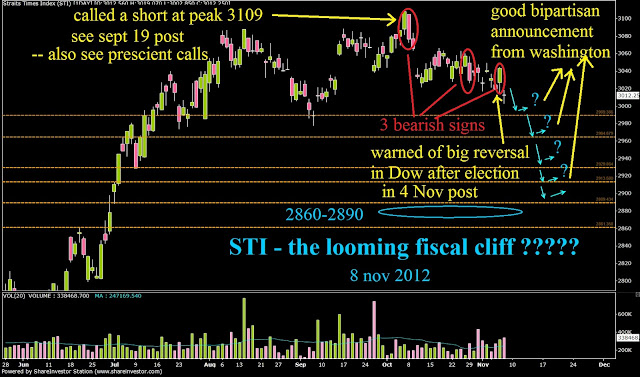 where would  we go from here ? will china related stocks continue their run while the  STi falls  ? you are welcome to attend my preview to find out my outlook ....  no obligations to sign up ..promise it to be an interesting eye-opener ..many  trading secrets & market revelations to be shared ..  so feel free  .. thanks! 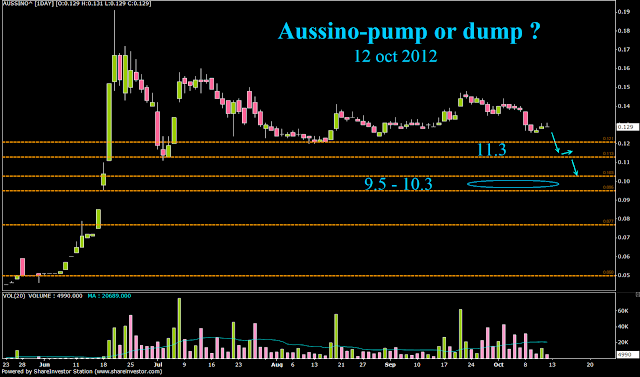 This week we will witness the election of  2 presidents from the 2 biggest economies of the world .. US & China. So this week , we take a break, instead of picking stocks , we pick presidents.

On Nov 6 , we have the US presidential elections, and on Nov 8 , the Chinese starts its 18th party congress culminating in the election of their next CCP leader, Xi JinPing.

In the US, despite unfavorable unemployment data , and despite what the opinion  polls like above says about the election results being a close call, a cliff hanger , nail bitter or in dead heat ( click here) , my bet is that Obama will be re-elected convincingly to a second term , for  reasons of favorable demographics ( seniors , uninsured , students , blacks, hispanics , women , sufferers of hurricane Sandy, lovers of Big bird , auto-workers in Detroit, fans of Bruce Springsteen,  and last but not least the 70% of americans who think they belong to the " 47%  victimized camp "  blackmarked by Mitt Romney..

Into this election, I think the dark clouds over the fiscal cliff problem may be lifted momentarily leading to a very small very short election  rally of sorts in the Dow before a big reversal post elections , when the electorate votes in a more pro-Democrat congress ( Senate and lower house )  and votes out the tea-party to resolve the grid-lock in Washington and to approve a grand bargain..hopefully ..

In China, every time there is a party congress, the CCP will prop up the Chinese stockmarket  ie the SSE ..   this year should be no different and the SSE is already showing signs of strength, readying for a small rally  . In fact, the HSi had already charged ahead of the party congress for the past 2 months since 7 sept , quite independent of the Dow.

So what stocks are in play this week ? -   selected china related stocks that may benefit from some big announcements from the 18th party congress.