In the last post( click here) , we discussed how we managed to catch the key reversals of some falling knives , namely Linc energy & Yuuzoo in May , returning some 70-120% gains within 10-12  days and with zero margin .

Eversince then, our chatrooms were itching to catch the next falling-knife key-reversal . For this we patiently waited for the chinese & HK markets to fall from their peaks , and fall precipituously they did .

Since 8 Jun at the peak of China indices ( SSE, A50, CSI ) , we have been advising our chatrooms to avoid buying the markets in the name of  Greek and China dramas about to unfold...while in fact getting our actual cues from the charts alone.

On 8 Jun right at the peak, while a billion chinese were celebrating & cheering the white hot chinese market that could do no wrong ( see SSE chart below) , we saw the bearishness of the market peaking and  told our chatrooms to get ready with SIP products like CFD shorting and put wrts, as we expect the markets is about to turn bad due to " problems from Greece" for lack of a better excuse ( see chart below ) .

True to form , after our first avoidance call , the markets immediately went sideways for one week with narrow activity then morphed into an accelerated plunge with China SSE down 35% in 4 weeks  to 3380 ( with HSI down to 22900 ) - below chart explains. 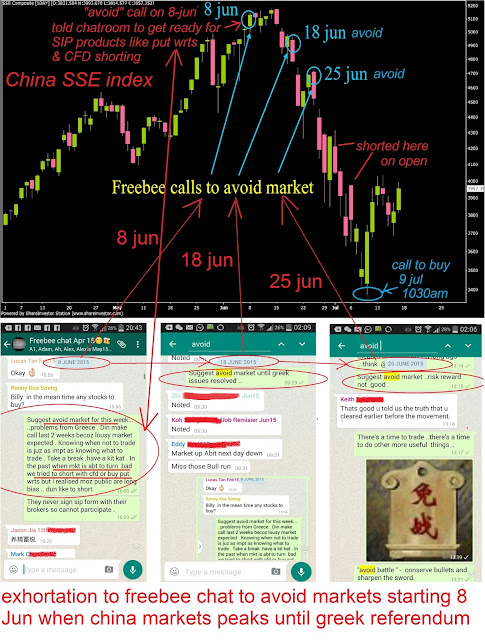 This accelerated decline was  "abetted" by the Greeks announcing a shock referendum on 28 jun and its "Oxi" outcome on 6 jul both of which the markets did not expect .

Unscathed by the prior market carnage that plagued the public at large ,  thanks to our avoidance mode , we were able to capture that golden opportunity on the Monday 29 Jun open following the shock announcement of Greek referendum the prev nite ..    We shorted on open the China-A50 index and Hang Seng Index through their respective put warrants.

Below pictures speak a thousand words on what we did to exploit the fear emanating from the shock referendum announcement abetted by the $300bn china margin call news - we bought  hsi  & cn put wrts. 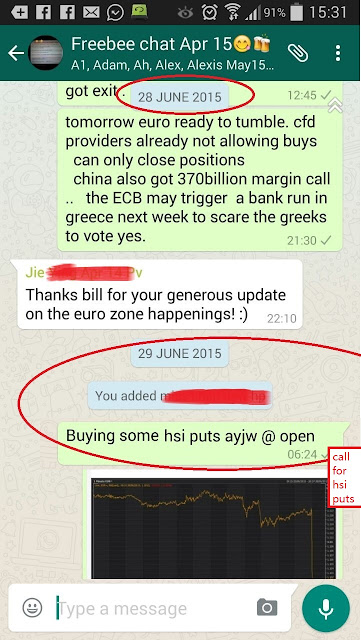 below is the order book on put warrants on  ChinaA50 and Hangseng index on  29 Jun. 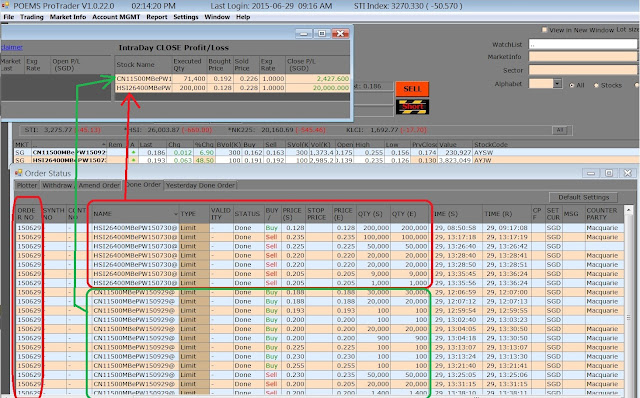 Eventually when the Greeks , against market expectations, defiantly voted "OXI"  or "No" in the much-awaited referendum  on 6 jul   , the markets went into tailspin mode in anticipation of Grexit,  and we carried on our shorting with HSI puts , but with a twist this time round.

While some saw this as an opportunity to buy, we saw from the charts that the markets were not ready for a bounce .

We saw this clearly as an opportunity to short the greek-china drama  further , buttressed by  the HSI  momentarily elevated by the chinese "desperate" market saving measures ( see our call in freebee chat below to buy hsi puts ) . 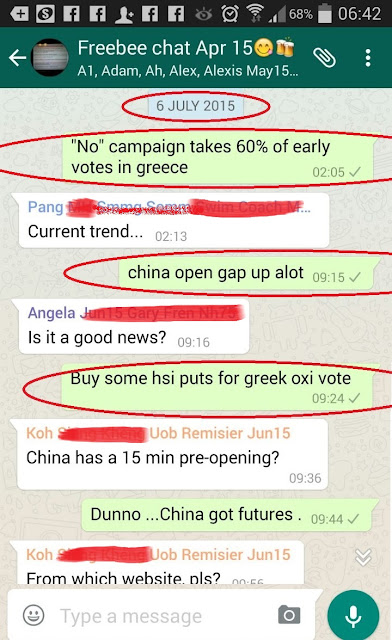 True to form ( see chart below) , the chinese market only managed to open gap up to 3970 the next Mon 6 jul morning after Greek Oxi vote ( while HSI opened flat )  then only to plunge further into the next few days, with >70% of  chinese listed companies volunteering to suspend themselves from further trading.(千股停牌). 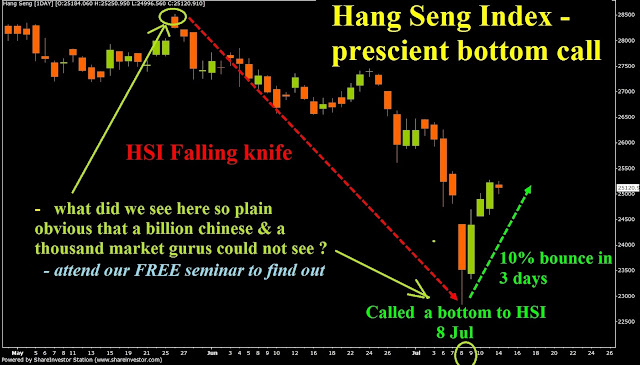 Smelling maximum fear into the plunge on 8 Jul , we  got our chatrooms ready for that highly anticipated capitulation moment and  key-reversal  of HK & China indexes that was to come the very next day on 9 Jul ( see above ) . 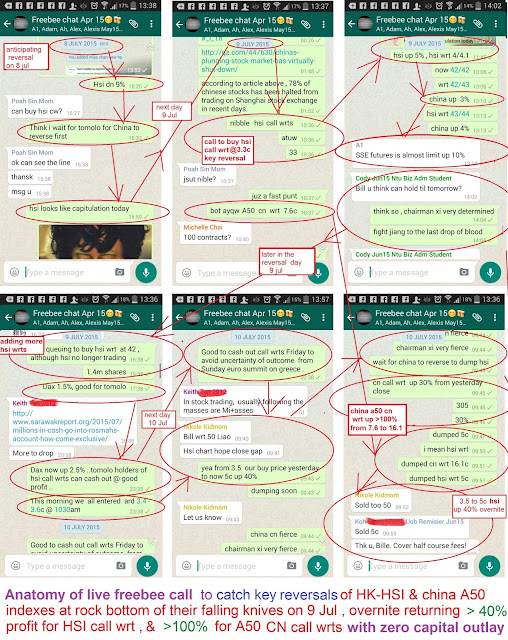 That sums up our latest knife catcher call ( 力挽狂澜, 絕地反擊 ) on the China & HK stockmarket indexes .. and our adroit steering clear of the  trillion dollar carnage in the chinese market since its peak on 8 Jun  -- the deluge of contra profit statements on key reversal by students and freebees to follow later ....

I was told by my hedge fund friends who tracked our calls , the endless back-to-back  successes of our knife catcher calls( for endless  examples , click here and here and here )    is the envy of market gurus the world over,  those precision calls from which fortunes of a life time  are made.

It is also  what eluded the billion chinese who saw and experienced the recent stockmarket carnage around them , having been time and again failed miserably by their market gurus who unwisely told their followers to catch every false bottom on the way down  and in one last desperate face-saving attempt decided to reverse stance , throw in the towel and told their followers to dump everything  at the real bottom to avoid what they now declare as the "bear market" , just before the strong bounce .

The mastery of catching key reversals,  I am told, is the ultimate dream that will allow hedge funds big or small with such skills to make a killing of  many life-times,  with the billion dollars of leverage they have.

and  just one more thing ..

A chance to be one up on a billion chinese , a million market gurus
and a thousand hedge funds  ..

Amazed by the super risk/reward of our knife-catcher & key reversal calls over the past year in public forums ?   We will be having a sharing session on this closely guarded technique  on 22 aug  2.30pm at  Raffles City -  so see you there , if you want to be one up on a billion chinese , a million market gurus and a thousand hedge funds  .. 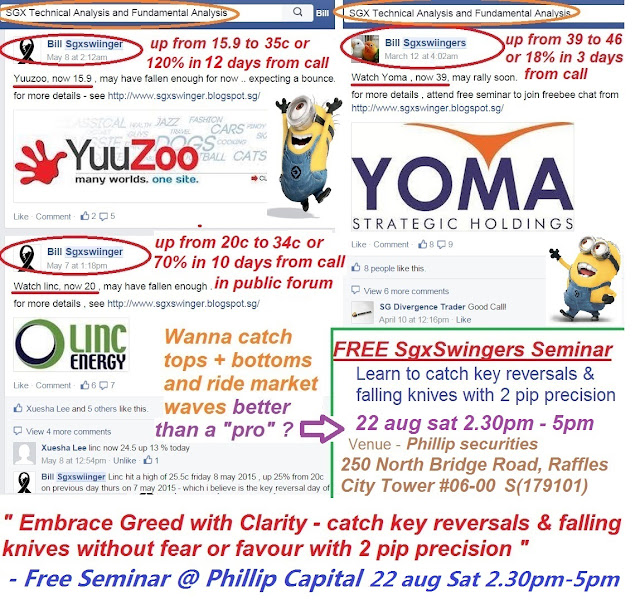 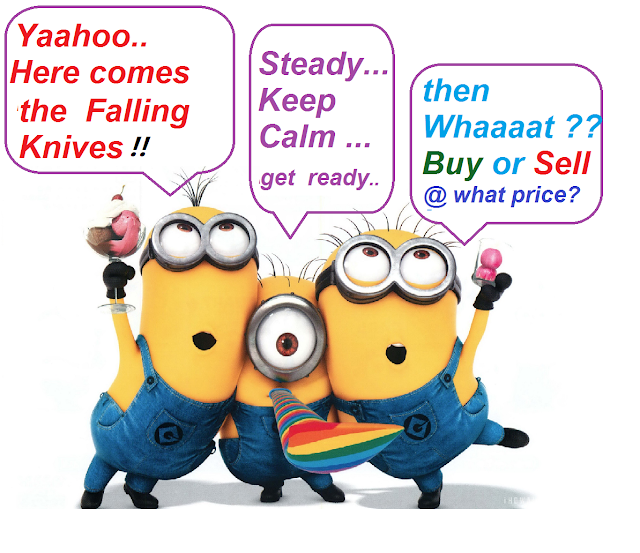 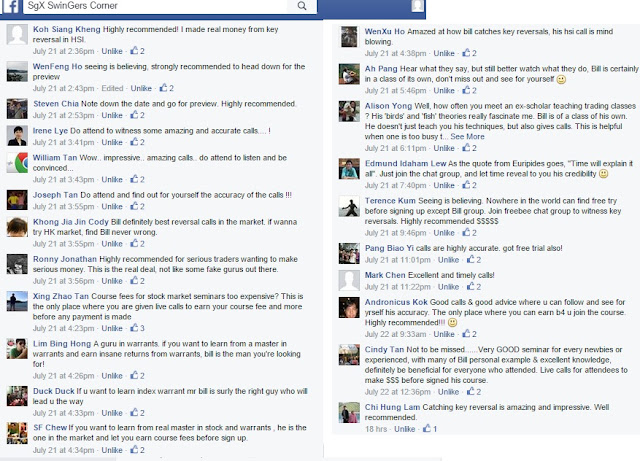 Posted by Bill E at 18:17 No comments: Links to this post