Today was an eventful day for stocks after many false breaks in recent past where stocks often break out on relatively high volume for only one day , then only to see its price fall back below breakout price over subsequent T+x followup  periods  , forcing many contra players or weak holders to cut losses. Alas , such is the convoluted process of accumulation.
Today was T+5 for the Ezion breakout last Tues,  there was supposed to be dumping by contra players which caused subdued price action in the morning
.
By 2pm , most contra players have already dumped or rolled-over , supply was depleted and one Ezion operator decided it is time for a breakout by whacking 767 lots at 93c  @ 1430 hrs.. This was followed up by a flurry of activity where we see > 1k lots buys at ever higher and higher prices all the way to 97c.

I had been a follower of Ezion since a few weeks ago ( see 8 mar post predicting a short term target of 94c when it should be 92c for contra play, anyway 94c was subsequently fulfilled after a gruelling  8 day wait to  20 mar only to see it fall back later to 91c  ) .

I sensed from Ezion price action in past 2 weeks that it had relative strength despite its "sister" company Ezra plunging ahead of and after  a share placement . 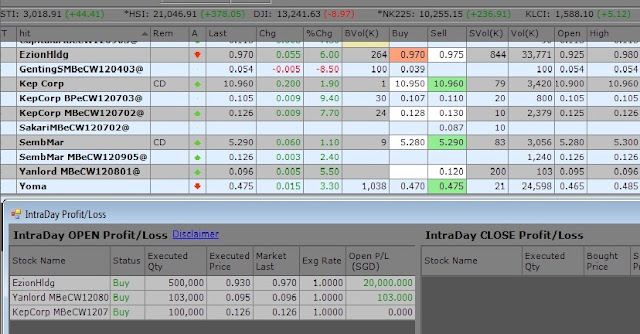 So given the tailwind provided by the Bernanke speech last nite and the STi road map i had and my belief we're due for a break beyond 3030 in the Sti , I thought it was not too late to partake in a  Ezion move even after the Dow had risen 140 pts last nite.

Add to that, yesterday's Ezion move was down which was good, to scare the wits out of contra players who bought high earlier .

So in the morning  i accumulated 250 lots at 92.5c in anticipation of a breakout , probably buying from contra players who bought at 94c last tues/wed.

My prayers were answered by 1430 hrs when one brave Ezion operator whacked  767 lots at 93c to cause an actual  breakout.  Upon which i immediately follow-up with another 250 lots at 93.5c to make up a total of 500 lots at average price of  93c. There was no looking back til it hit 98c upon which we see some downward reaction.
Where would Ezion go tomorrow or over the next few days ?  Will it hit 98-99c and fall or proceed to go higher to $1 + ?

Of course if the price action over next few days proves that my tape reading is all wrong , i will react accordingly ..

Precision and prescience - Mr Bernanke "responded" in less than 24 hours to our technical predictions and the Dow shoots up more than 1% ...

Less than 24 hours after we predicted  the end of a short-term correction in a generally down market ( see last post ) ,  Bernanke makes a speech and the Dow shoots up more than 1.2% and Nasdaq up >1.8%  ...

Thank you Mr Bernanke for "responding"  in such timely fashion to our technical predictions ...  and thank you readers for your generous compliments in the last post comments section.
Posted by Bill E at 01:32 No comments: Links to this post

STi could have finished its current little correction from old resistance 3030 tomorrow and may proceed to 3050-63 relatively unhindered. Watch Sembmarine , Ezion etc

2 posts ago  , i posed the question - To punt or not to punt Yoma given trade restrictions on Yoma imposed at some brokerages & the rather unflattering commentary on Yoma from a certain website.

This afternoon  while sipping coffee with my friend in a coffeeshop near my home,  I got my answer from a sms alert that told me Yoma had just breached 44c. Immediately i bade my friend goodbye and rushed home ,  in time to whack 500 lots at 44.5c. Then as Yomas rises, i pyramid up a  smaller amount at 45c then an even smaller amount at 45.5c or day high and closing price for a total of 800 lots at an average price of 44.7c for the day ..

While still holding a small amount of Yoma bought at 38/39c  in the recent correction as my pyramid base   ,  why am I buying more Yoma  at  ever higher prices despite the widespread convincing misgivings about this stock's fundamentals from foreign  websites and local brokerages alike ?

The answer lies in the price action AND my tradeplan posted 8 Mar
which says if Yoma breaks 44c barrier , it should go higher  ..


Add to this , i believe in my STi roadmap ( see last post or  STi roadmap tab above -)  which says the STi rally in the very short term should be smooth going until at least 3050-65 ,, so the tailwind for a successful Yoma price pumping operation is there ..

Tomorrow , I shall see where Yoma would go.  I would expect it to go to 47-48c at least.  So in the morning soon after open, I would dump two thirds of my holding at these prices  if  it goes my way,,
.
I shall leave the rest to ride the price pump, to see if it would go to 52c-54c  which was my original defy-the-market target which i posted on 26 feb when the market was in the midst of a correction.


Of course tomorrow's price action could prove that my tape reading is all wrong and i shall react accordingly when it does not go my way..

STi updated roadmap - Breakout ! STi should rally to our next easy target of 3050 pause then 3065 then small correction then 3130 then bigger correction . Final target is 3160-3200 then a big big correction. See STi roadmap "tab" above for archive of old roadmaps.. 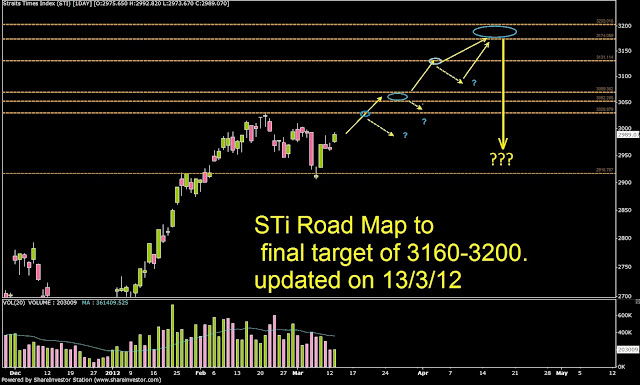 We here update the STi road map or big picture trajectory which will be kept inside the STi roadmap archive  tab above which also keeps a record of previous roadmaps for future reference.

Posted by Bill E at 21:57 No comments: Links to this post

No market call for today or tonite .. US jobs data tonite ..

Posted by Bill E at 12:18 No comments: Links to this post

Only 2 days ago, the financial media & analysts were "reacting"  to the consecutive days of falls in STi / Dow with  hindsight bearish calls , citing potential disorderly Greek default, China hard landing etc .. and wildly projecting the STI to go to 2800 in this correction.
Posted by Bill E at 11:12 No comments: Links to this post

Errata : Yoma should reach easy short-term target of 49-50c  if  it breaks 44c barrier ..  Higher targets are possible but we cross the bridge when we come to it.
Posted by Bill E at 11:27 No comments: Links to this post

STi sinks 100 pts since hitting our target of 3030 - Sembmar and Kepcorp hit our short-term targets exactly last fri and turned south today ... Temasek announces today it trims a 3% stake in Sembmar @5.25 - another example of fundamental events responding to our technical predictions. 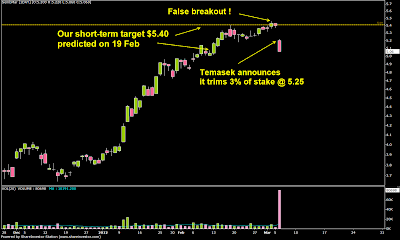 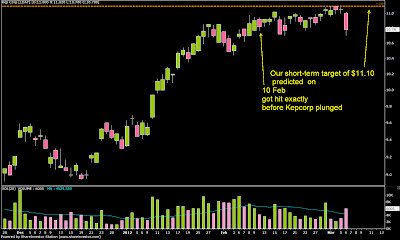 STi sinks 100 pts since hitting our target of  3030 ...  Sembmar and Kepcorp hit our short-term targets exactly last fri and turned south today ... Temasek announces today it trims a 3% stake in Sembmar @5.25 - another example of fundamental events responding to our technical predictions on 10 feb  post .
Posted by Bill E at 14:44 No comments: Links to this post